Our monthly gaming day has been set as the final Saturday in the month. We meet at 8.30am and play through to lunch time. It is working out very well and leaves the rest of the day to do family stuff. Yesterday saw us back at the Guildball pitch and we were both looking forward to it very much. The Dark Templar had laid out his thoughts on his blog. 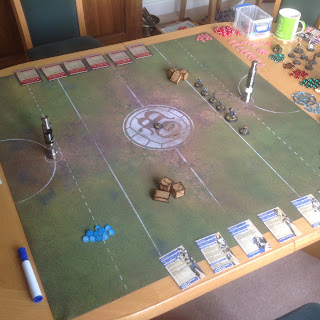 I had done some reading on my Masons and decided to take Brick for the first time. I dropped Tower. There is a lot written about Brick but I had figured out that his roll can be complementary to the overall team. I am playing him as a rumble strip. He sits in the middle of the board and can charge anything that comes in his 6" range. With 19 wounds he can be a pain for the opposition. I am not planning to give him influence and this will mean that I can stack it elsewhere. Flint and Harmony will be my runners and ball carriers. Honour and Mallet will be my beat sticks. Marbles will support in the middle of the board and cast Tooled Up on Mallet, adding plus one to his damage. 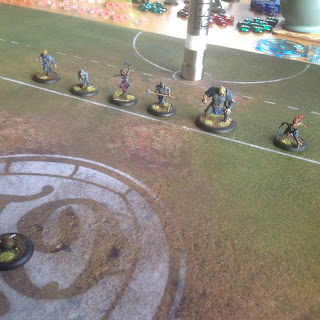 My plan was to stack Influence on Honour and Mallet and focus them on a single target to kill someone and get the player numbers working in my favour. I want to use Momentum to allow my guys to have the additional 4" dodge. This will increase my movement and make it hard to get to me. That was the basic plan.

So to the game.

It was fantastic. A proper dust up, a really great game that ebbed and flowed and had us breathless by the end.

We played Plots for the first time. 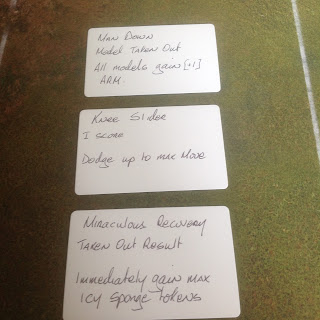 You deal 5 and pick 3 out of the five. I had Man Down, Knee Slide and Miraculous Recovery. Very handy especially against the Butchers.

I opted to receive the ball. This was a first but I figured starting with the ball would be a good thing for the Masons.  Brisket kicked off and the ball bounced very kindly to land in front of Harmony. 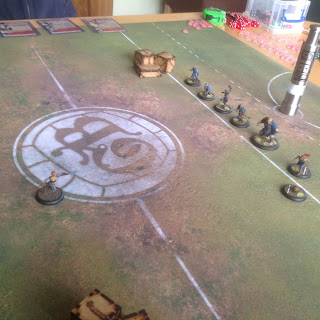 Harmony picked up the ball and then kicked it to Honour who kicked it to Mallet who kicked it Flint. This all generated lots of Momentum and gave me lots of 4" dodges. I was able to advance Mallet using Quick Time. Honour got stuck into Boar. Unfortunately the Butchers were wise to my tactics and managed to break line of sight so that Mallet could not double team Boar. As it was he was badly mauled. Mallet got stuck in to the rest of the Butchers team instead. My new dice were on fire. I am loving them. 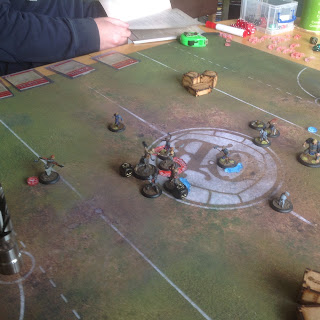 The new tokens were brilliant too!! It is much easier to keep track of all the buffs etc.

Flint advanced up the right hand side of the field with ball. 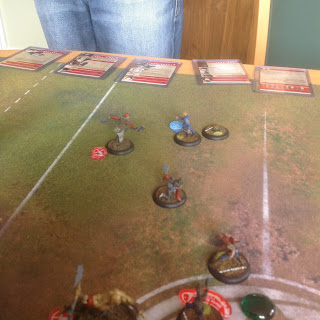 The Butchers got to him and stripped the ball.Only for Flint to get the ball back and score. A great start. The Butchers were bloodied and we the Masons had scored. This felt like a very different game to those that we had played to date.

The Butchers recovered the ball. 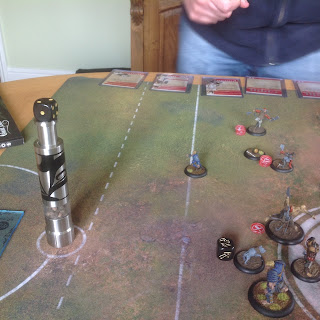 They bunched together in the middle of the park to take advantage of over lapping pulse effects. They recovered their composure and began to do what they do best - dish out damage. They advanced the ball and quickly scored while taking out Honour, Harmony and Marbles. Ouch! I was able to use Miraculous Recovery to get Honour back into the game and try to defend against the score. To no avail. 10 - 4 to the Butchers. 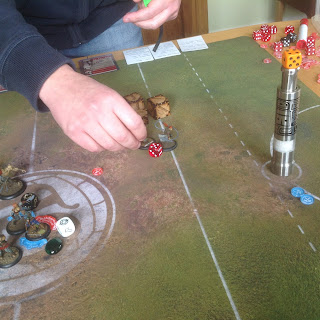 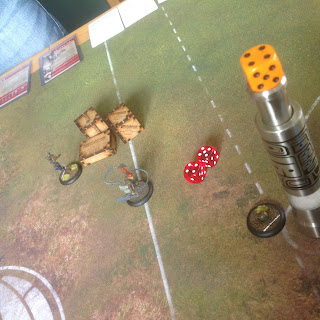 However she was well positioned for the restart. I recovered the ball and ran down the right and kicked to Flint. I used Superior Strategy to allow Fint to immediately activate. He ran and used Where'd They Go and Super Shot to score. 10 - 8 before the Butchers could do anything about it. It was on a knife edge. Could the Masons get the ball back and score to win? Or would the Butchers finish off another Mason to claim the victory. 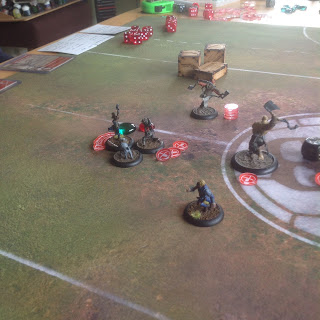 It was to be the Butchers day. They ganged up on Honour and took her out of the game. But what a game.

I have proved that the is much more to the Masons and the way to achieve this is to stack Influence. Brick works because he is not given any Influence. I am starting to understand how to use Influence to generate Momentum to give additional Movement. There is a lot to this game and each team has its own specific character. I think that the Masons are difficult to play because you have to think strategy and tactics and then use the Influence properly to deliver the plan. Bloody good fun though.
Posted by Bullcher Feb at 01:42