I have finally given in and opened the Zombicide Black Plague game, properly. I read the rules and did a bit of play testing. Took me a while to get things right. There are a fair fews differences to the Zombicide that I love so much. 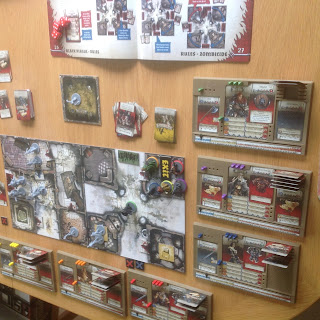 The tutorial scenario is good and it is an opportunity to get used to the new weapons, spells, armour, enhancements and the vaults. You have to see the board differently and the noise tokens are good for keeping track of exactly which room is making noise. I played it three times.

I love the new character trays and counters. I think they work really well. A great way of keeping everything neat and tidy. The colour co-ordinated plastic also works. It ties the model base visually to its tray. Good thinking.

There are also a few quirks to get used to in the zombie phase with double activations on the second spawning point.

It does seem to be less threatening in the early phases. Maybe this is because you have 3 wounds instead of 2 and there is the opportunity to use armour to save hits and there is also healing. I missed the sense of dread and manic searching that accompanied so many of the Zombicide games. There also appears to be less useless stuff. Most of the cards are useful weapons so that the team gets 'tooled up' early.

I moved into the first scenario confidently.

I hadn't read the rules properly and it was so funny. I miss read the Necromancer rules such that I had 5 of them in the game each with its own spawning point. I was soon completely over whelmed. It was a hoot. But then I read that you could only have one in the game at any time. Life became a lot easier after that revelation!

Always fun learning a new game and can't wait to play this with a group. Very worthwhile so far.
Posted by Bullcher Feb at 13:31