This easter we had my sisters family over from Ireland. Three kids ranging from 6 - 12. The house  is filled with games and it was the perfect excuse to make some introductions. 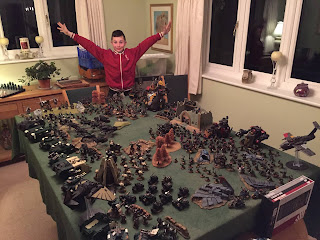 First up was Warhammer 40k. I set up the table with my Orks and Dark Angels. A jaw dropping spectacle and some very excited youngsters. Nothing got broken which was nothing short of a miracle. I had expected casualties. Well you have to play with the models. Handfuls of dice great fun.

Next up was Zombicide. We played everyday before breakfast. 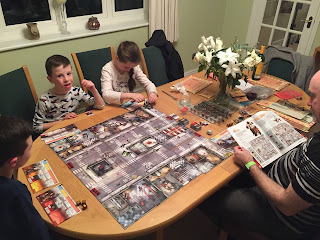 I had bought Ciaran the game for Christmas but he hadn't played it. Well they loved it. The nice thing here is that we are all playing on the same side so everyone helps everyone else. Things did get a little competitive when it came to head count - who had killed more zombies than anyone else. In fact there were totals for the entire holiday. Very funny.

I had spent most of November painting zombies and it was great to get so many games. It does make a difference when there is a bit of paint around.

Finally yesterday we had a long awaited Games Day and a few games of Zombicide Black Plague. This was hosted by the Dark Templar and we had Michael Awdry of 28mm Victorian Warfare fame and two new additions to our gaming crew Chris and Ryan. A fabulous fun day. 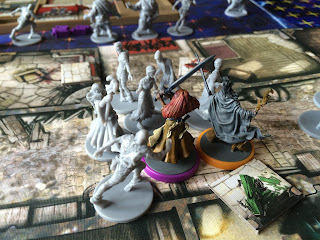 I had painted (well nearly) the survivors so we used them on the day. Above is Baldric and Nelly fighting for their lives. You know things are going be tough when the Abomination turns up on turn one. Search, search, search ..... We got him in the end! 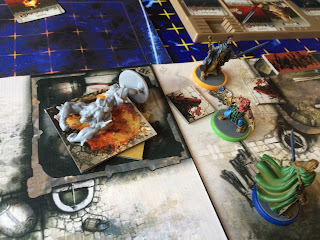 We played three and won two. The final game was very close though and we nearly went down but  survived to fight again another day as we successfully limped to the exit. 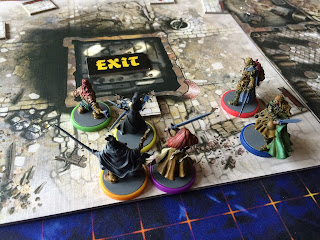 Fantastic fun! I look forward to the next outing with much excitement.