Belial had suffered horribly at the hands of the zombies. He was barely alive when the medics finally got him. Typhus had sensed the Dark Angels reinforcements and abandoned the battle at the end of turn five. Good thing too or Belial may not have pulled through.

The medics had spent days working on him. Bionics had been built into his flesh.

'We can rebuild him' 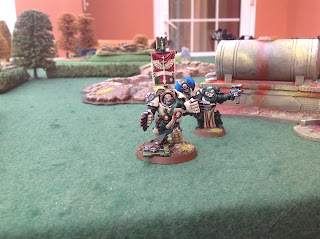 But at what cost?

Gone the boyish, blonde good looks. Bionics replaced the damaged, blinded left eye. The mouth remained distorted and the new tabard disguised extensive damage to the left hand side of the body but.... he was back....and Typhus would pay in blood!!