Hi there all. This weekend saw another game of Bloodbowl and a new player entering the fray. It was great fun and an interesting experience for me.

The South Coast Saurus took on the Dark Templars new Nurgle team. I was .... well the crowd, the ref, the Saurus cheerleader and helper. I think you could say that I asked some good questions and made some 3rd party suggestions.

Now what is interesting is that I have actually learned a lot as a result. Because I had less emotional attachment I was more concerned with coaching some good practice. I was more detached and what I noticed is that: -

1. We looked at the action from a risk perspective - who was free to move? what did we want to achieve? as a result movement was in the right order - all the low risk stuff first. Michael (the Saurus coach) had a calm head and was much less aggressive than I play. Note to self - this is a good thing and I need some of that calm.

2. When the turn looked finished i.e. the Saurus had achieved what they desired, we asked the calm question - what else? Is it now worth Dodging that guy out to achieve a reposition? There was no down side and maybe an upside. These are good questions. Often I stop thinking when I achieve what I want and just hand over my turn. Calm is good.

3. Beating up the opposition is not the main focus. Michael is relatively new to gaming and as such was focused on the scoreboard and not just beating people up. This is not a game of 40k and as I look back I have learned that I need to think like this too.

4. Nuffle is not to be trusted! When Nuffle is with you it is a joy but ..... there were a number of occasions in the match when the Dark Templar set a plan in motion that relied on his 'Big Man' to deliver the first blow and follow up. Nuffle took this opportunity to trip him up!! and it was at the start of a turn so this burned rerolls. I can look back and see that I fell in the same trap myself with my Orc Troll! The 'Big Men' of bloodbowl should be moved much later in the turn. 'Really Stupid' can hurt a lot. I wonder - are they really worth having? I am unsure. Amazing what you see as a third party.

5. Bloodbowl is just great fun! I have come to understand that this is truly a fantastic game. It is simple and yet complicated. You become emotionally involved, it reaches inside of you and toys with the heat strings. You live the stories. I laugh out loud and enjoy the entire game. It is not often that this happens in life - so it should be treasured. Play blood bowl - its good for you!

Anyway the Dark Templar has done a detailed write up for those interested. All good stuff.

I also took a few pictures myself.

I just love the skinks.

The scorer of the first touchdown was 'Kinky' - a truly great name.

Here he is running in a score. 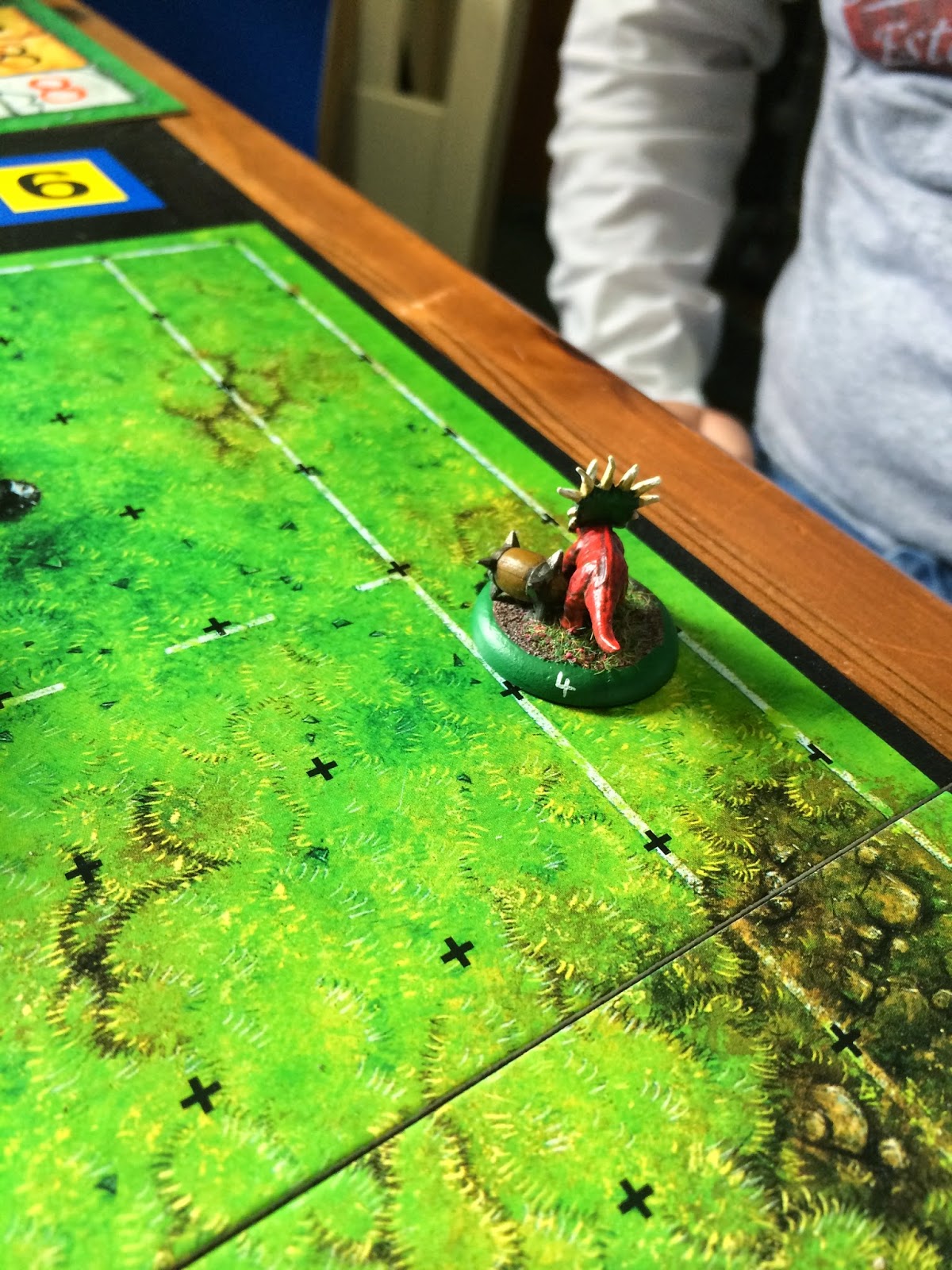 The interesting thing is that Michael used the skink speed to make the score. He first advanced the ball down the right. 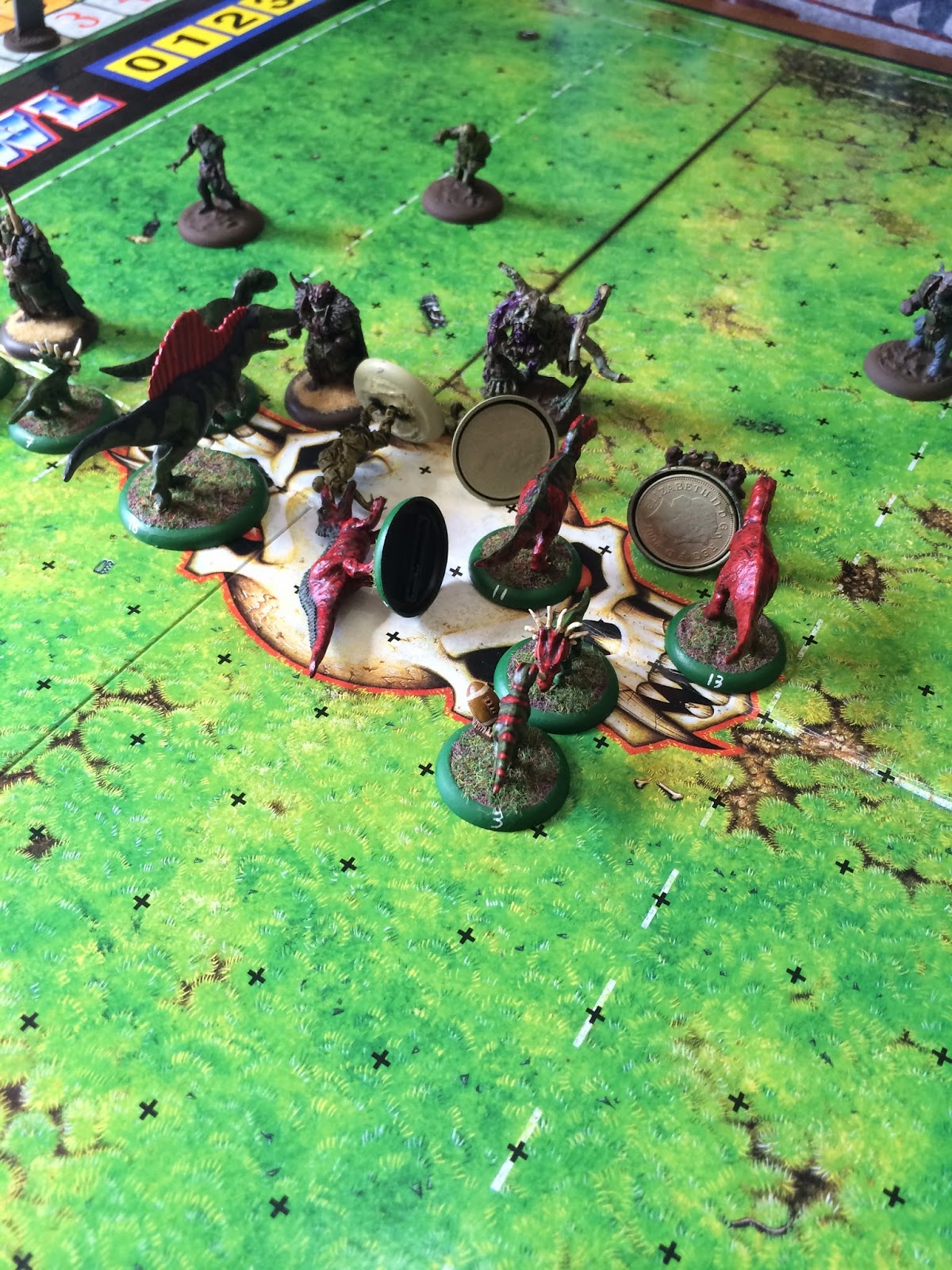 This drew in the Nurgle big guns, but they are slow. Michael switched the play to the left and suddenly had the advantage. It was a really cool manoeuvre. 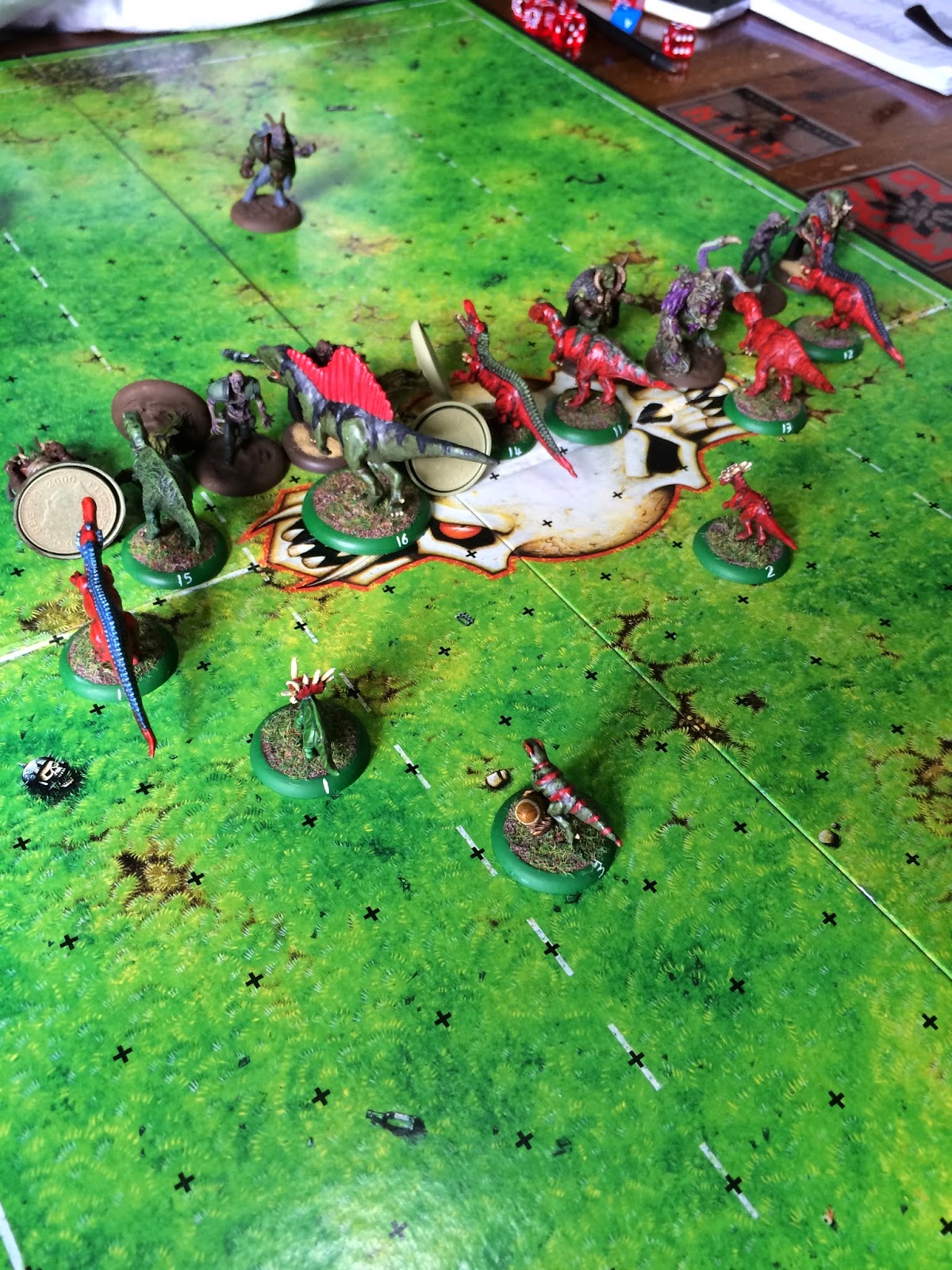 You can see here how there are a number of the nurgle boys are thrown out of position. Movement of 4 just doesn't get them back in the game. Suddenly the skinks are on the move and finally 'Kinky' does the business.

The second score was just sooooo funny because the Dark Templar just could not pick the ball up! Lets face it, if the ball is loose then trouble is just around the corner. This is one of the problems of playing a 'vanilla' team. There are very few skills available so no individuals are good a specific things yet. Big problem.

Again the skinks came into their own and this time the 'Redsnapper' skipped in and thieved the ball before running it in for TD! 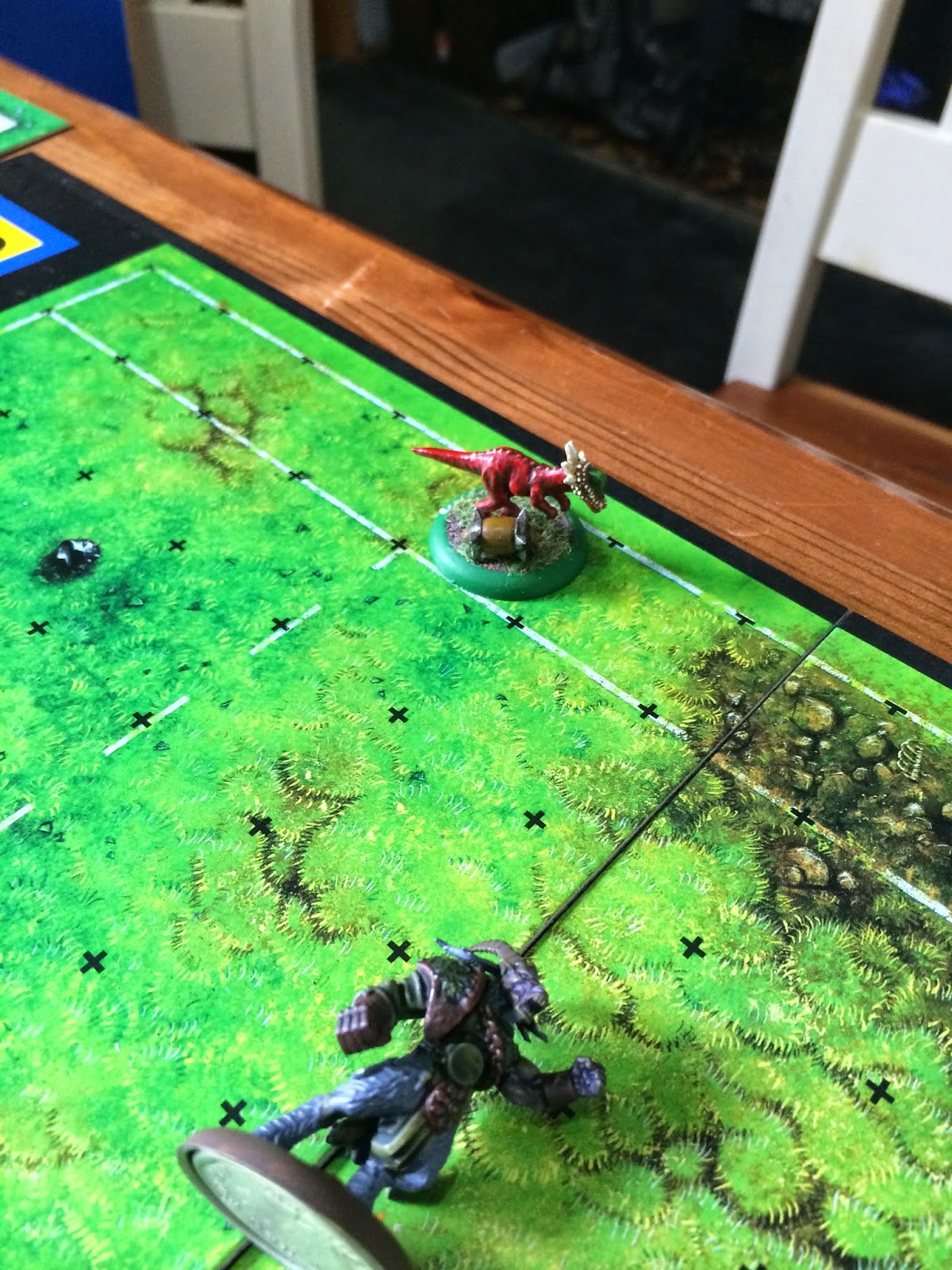 It was just great to see. I soooo loved the goblin that I played with the orcs. Now it looked like there were several running around and causing the type of chaos that I love. I am seriously thinking about making changes to my orc lineup!! Troll - emmmmmm. More goblins - well I like the thought at the moment.

I was loving it.

But just after half time I had to go. I had to wait nearly 3 months for this day and then my wife accepts an invitation to be somewhere in the afternoon. "Well it is Easter" etc etc grrrrrrr. I had to go at 2.30pm so missed the end, much to my dismay. However it was a great session of bloodbowl.

The final score was 3-1 to Michael - well done sir and thank you for hosting such an enjoyable day.

Looking forward to the next big game. It should be my pro elves v the saurus. I am living in fear if I am honest!