Well Christmas is just around the corner and the recent Dark Templar posting has prompted a rummage in the garage. A trip back in time to when I first started playing. It was in the summer of 1988 when I first discovered 'The Orcs Nest' in London and my first Games Workshop models - the Game 'Blood Bowl'. 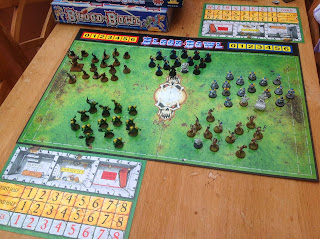 This is the second version of the game. The first is in the box at the back of the picture. I played a lot in the first flat that I stayed in. We had up to 15 people living in the house so no shortage of opponents!! Great fun. Then some years later when living in Tunbridge Wells we returned to the game. (Painting skills were dreadful - obviously!!)

In TWells there were 8 of us and we played for a few months and then drifted on to other things. As usual, towards the end of our playing cycle, I had just purchased some new models that never got any playing time.

My first team were the Dwarves. 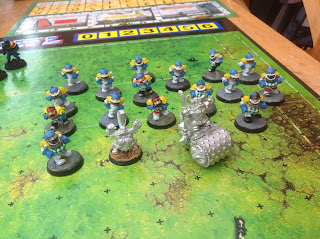 I remember trying to paint the eyes - OMG! They became a bit dull to play though. Slow moving etc. I had just purchased the Deathroller before we stopped playing. Crying out for paint!!!

Orcs became my main team. Well I am an Orc at heart. They are versatile and can do some serious damage on the ground. 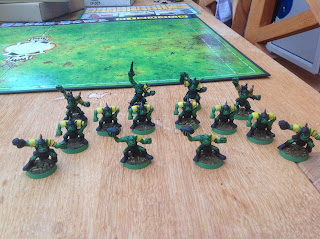 Got to love those Blockers and Blitzers. I even have a few unpainted models in the box but we can look at them another time.

I also have some Humans, Ratmen and Amazons - so much to remember ;-)

Christmas could be fun this year!!

Now where did I leave that Warhammer army - ah yes - I remember.......there was a bit of an accident.... my wife dropped the box they were stored in about 3 years ago. Carnage - do I dare open the box - I think I will get some more glue before taking on that challenge!!