Does your mother stitch?

Malcolm had seen it all before.

Once he sounded his horn the war band rushed forward to engage the enemy. Conn & Diarmuid had applied the body paint and would soon be wailing on some unsuspecting Roman. Finn had taken on the leadership duties and his stature encouraged him to use the double handed axe, his favorite toy. Fergal was more traditionally equipped and Fiacha was deploying his usual 'Does your mother stitch?' tactic. 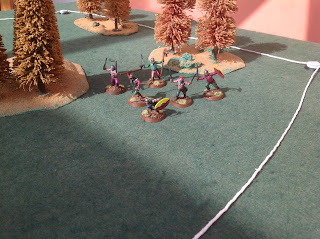 Fiacha lowers his body position and charges forward. The confused opponent not sure how to defend would move his shield to the side expecting a crazy slash from his sword but at the last minute would find himself impaled on Fiacha's helmet.