Well 2017 is upon us and the Gamesworkshop has dusted itself down and finally rediscovered Bloodbowl! I purchased the new box set before Christmas and like an excited child enjoyed the whole 'unboxing' experience.

The pitch is a lot bigger and the models are set on larger bases. I think this is a good thing as it is easier to place the ball on the base. A practical thing but useful none the less.

The dice are cool but I must admit that having a Bloodbowl symbol as the six on the D6 dice means that I often pick them up instead of Block dice and I find that annoying. I have taken to splitting the colours so that I use the green Block dice and then the Blue D6 dice. It feels wrong but it is a practical solution.
I love the human models. I have started to paint the team and I am enjoying finding all the lovely detail especially around the hands and straps and stuff.

The new models just clip together, no need for glue. It seems to work really well. I must admit to being disappointed by the Ork models tough.


They are all a bit bulky and they are leaning over and there is a bit too much armour plating. Now I am an Ork at heart but I just can't seem to light any enthusiasm for them. Maybe they will grow on me but ..... there's not enough Ork for me. 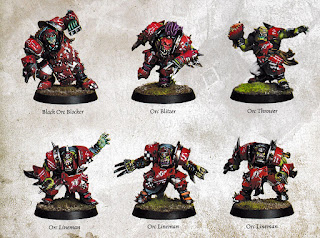 Locally there is an increase in the number of people showing interest in playing. We may have 6-8 people which would be amazing so we are considering setting up a league or mini tournament. I also bought the Supplement and as we leafed through it last night we noticed that a number of the traditional teams are not present. The Amazons are a prime example.

Myself and the Dark Templar had a short game just to get back into rules and stuff and it wasn't long before we were remembering how much we love the game. I played the human team, from the box, and the Dark Templar played his Dark Elves. A human victory, 2-1 but really it was about re-learning the rules and boy did we make some mistakes. Bring on 2017 and some serious Bloodbowl fun.