Having had a couple of games of Frostgrave I decided that I really needed to have my Wizard and Apprentice. I got online to Element Games and it wasn't long until the postman came a knocking. I had completely incinerated some of the opposition with fire bolts flying in all directions so I really like that the Wizard is clearly in the middle of throwing some fire bolts and the Apprentice is carefully handling a ball of flames. Lovely little touches.

Following up on the last game I have invested in a new spell - Elemental Ball. This has Area Of Effect (AOE) when doing damage which extends 1.5" from the base of the target model. I reckon about a 4" disk. Each model in the area suffers a +5 Shooting attack. There is a range of 24" and you need line of sight.

We had been using some of the Warband to shield our Wizard so this will make that tactic a little harder to implement. I am looking forward to trying it out.

I have been doing a bit more reading and I note that the low starting gold (500 gold and your apprentice costs 200 leaving 300 for troops) means that in the beginning the choice of soldiers is limited and the number of soldiers taken is low, maybe 6 out of the 10 allowed.

The way the Warband advances is to spend gold on more troops and then over time on better troops. If a soldier is 'taken out' during the game you roll for them at the end to see what happens. There is a 20% chance of death and I have noted that the soldier is removed from the roster and all his equipment is lost. This will be important because the next way to advance the Warband is by increasing the quality of equipment, the type of equipment and use of magical items, potions etc.

So the Warband gets better over time and it would be hard to lose a member that had been properly tooled up. You might start with a 20 gold crown (gc) Thief who has a dagger (-1 damage modifier) that gives him +1 Fight and 10 Health. Then you upgrade to say a Barbarian at 100gc who has a two handed weapon (+2 damage modifier) that gives +4 Fight and 14 Health. This is a decent stat improvement.

He has one more item that can be given to him. So lets say ...  Gloves of Strength 300gc. This would give him +2 damage modifier. That is 400gc on one member of the Warband. It would take many games to be able to afford to gear up the Warband and it would be a loss if an individual died.

Back in the day, I started my gaming career with Necromunda. There are many similarities to Frostgrave in that the war bands are about the same size and after each game the warband gains experience, weaponry, money etc. On e of the things that I liked about Necromunda was that during the game you often unearthed creatures that then tried to do you damage.

After my first couple of Frostgrave games I had a read through some of the set scenarios and realised that I would have to go back in time and dust off some of the Necromunda 'bad guys'. I trip into the garage took me back in time. The Necromunda figures had not se the light of day in many years.

I also had a look at some of the Bloodbowl figures and even Malifaux.

Oh yes, I am feeling the love. Obviously some of them need to be 'tidied up'. The Genestealers were our 'go to' monster but other than that we have rats, spiders, skeletons, zombies, my Bloodbowl Troll and Ratogre as well as some dogs from Malifaux. In the middle of it all is a really old fashioned chaos beast.

Anyway it all adds to the flavour and will allow some variety in scenario playing.
Posted by Bullcher Feb at 05:57 2 comments:

Email ThisBlogThis!Share to TwitterShare to FacebookShare to Pinterest
Labels: Frostgrave

The second game in our campaign saw us follow the same format as the first. We placed the treasure tokens and we were ready to go.

My warband had grown and was now 11 strong. I was using some replacement models from Zombicide Black Plague. Having the Inn as my base allows me to take an extra member. I spent my gold crowns on a Marksman, two more Rangers and another Thief.

This meant that the board was much more open and this made life a lot more difficult. You really do need lots of Terrain for this game.

The pattern for the game followed along the lines of the first game except we had much more people on the board. I placed a couple of Walls and the Dark Templar threw down some fog. It was all a bit mad. We went from total openness to a blockade in a matter of minutes. It wasn't helped by us placing the tokens in a fairly narrow line along the centre of the board.

We both suffered casualties from the ranged weapons and spell casters. Neither Wizard took out any of the opposition. We have figured out that there are big bonuses for this so its something that we need to pay attention to in future.

We each captured three pieces of Treasure and I even used my Telekinesis ability to drag a piece of treasure from the centre of the board to make it easier to capture. It was good fun pinging shots across the table.

In the end phase, I spent my XP on improving my ability to cast Wall and Elemental Bolt and I spent my money on acquiring a new spell Elemental Ball. I am keeping a fairly detailed spread sheet with records of exactly what happened to who. So far I lost my Apprentice in game one, but he recovered and then I lost my Ranger Gawain in the second but he also recovered.

I have 245 gold crowns in the bank, A Grimoire with the Heal spell and a  Scroll with the Plane Walk spell. It is starting to build nicely.
Posted by Bullcher Feb at 04:06 2 comments:

So we have played Frostgrave. Me oh my. I have been looking forward to it for time now. It is an extreme game and I love its spirit. I think that it speaks to the soul of a proper gamer. I love that fact that the wizard is central to everything and that the damage dealing is, well, out there!!

We learned that that we need to take more risks with the wizards. We were to cautious by far. This game is different. Having said that, I feel more bought into it than many others we have played over many years. Frostgrave is intelligent. Someone has thought about what 'gamers' like and built this game around that ethos. I am impressed  - and I mean seriously impressed. We have tried to build games - new games - based on what we love and its like someone has been in my brain and delivered that which we have been trying to develop. I am amazed and delighted in equal measure. It lack 'handfuls of dice' but that is all. It is fast moving and drama is delivered in spades!!!

You have got to play this game. It is just so much fun. Quick action, short timescale, and utterly dynamic. Fun fun fun.

I had managed to get some paint on my guys and added Baldric and Samson to give me a starting lineup.
This is my starting roster. There are one or two stat errors which we picked up along the way. In the main my plan was to use wall a lot and Then on offence I had Elemental Bolt. I invested in a Ranger to give some covering fire. My fast moving Thief & Treasure Hunter would go after the Treasure.
I set-up the gaming area and I thought it was quite busy but we have learned that the game requires more terrain.

I played Baldric and Samson as my Wizard and Apprentice and then the others as they were built. We used green and blue dice as treasure markers. I have ordered Treasure Markers and dice - just waiting on delivery.

And so to battle and it wasn't long before my first Wall appears. And then my second. (large matchbox wrapped in a paper sheet) 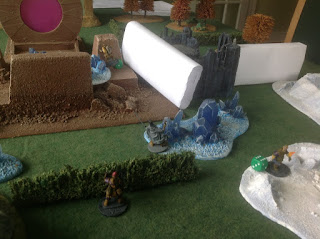 It was really effective and allowed me to gather the Treasure in relative freedom. However I was getting to cocky and had not realised how devastating ranged shooting and magic could be. Our first casualty was soon in evidence - my apprentice, Samson!! Dead. 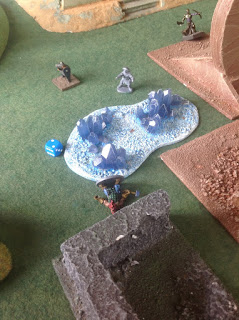 We giggled but to be honest I was hoping this wasn't going to be a fatal blow for my Warband. Only time would tell. We played on and My first Elemental Bolt proved to be impressive as I dispatched one of the enemy soldiers. All that was left was the singed spot he was standing on. It was all good fun.

We finished with three treasures each which was a nice balanced start.

In the after game phase I was delighted when my Apprentice recovered with full health and then I rolled very lucky on the Treasure tables resulting in lots of Gold Crowns and a Grimoire which I already knew so I could sell it. Result.

I elected for an Inn as my base. This allowed me to increase the Warband size from 10 to 11. I filled the ranks with a Marksman, two more Rangers and another fast moving Thief. A great start to my Frostgrave adventure.

Yesterday I took delivery of some Frostgrave soldiers from the Dark Templar, thank you kind sir. Great kits and everything swaps so it is possible to build some characterful models.

I have previously drawn up a warband and so now I have the chance to construct the models.

First up is my Thief. 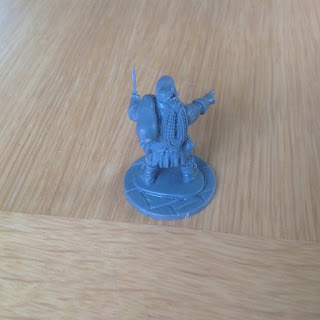 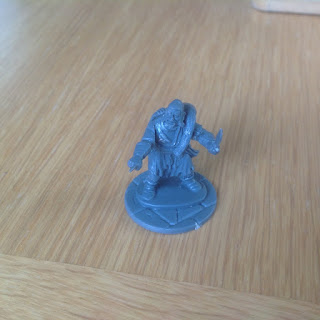 He is armed with a dagger and I have given him a sackful of loot and some rope. He might need that to get to those difficult to reach windows.

Next is my Man at Arms. 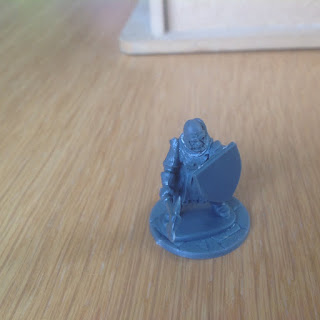 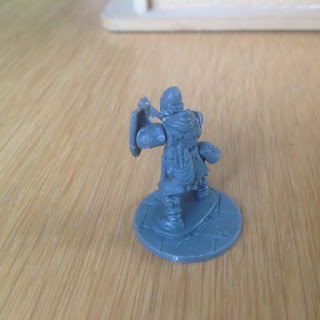 He has a hand weapon and shield. I have added pouches to the rear belt on the assumption that a man at arms will needs lots of bits and pieces to maintain his weaponry.

Then we have the Ranger. 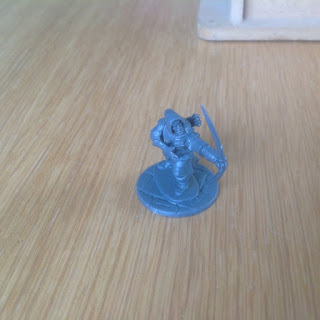 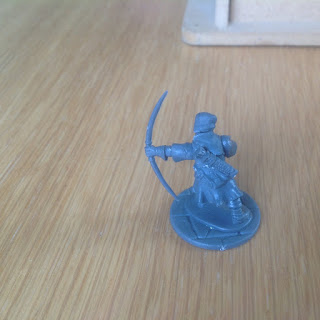 He is armed with a bow, hand weapon and I added the quiver of arrows to his back.

I have also opted for a Thug. 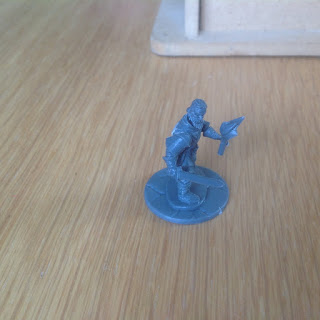 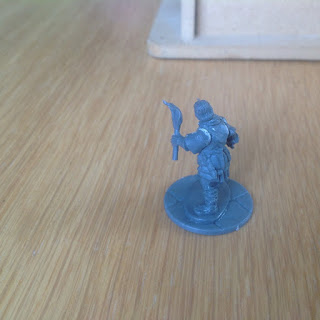 He has a hand weapon and I added a stick with fire in the off hand. That is very thug-like. Maybe he will be setting fire to something or else he is just out on an evening prowl.

Finally we have the Treasure Hunter. 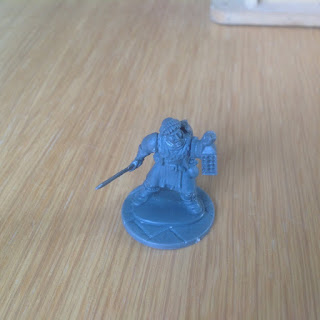 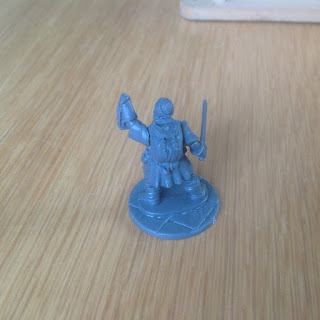 I like this guy a lot. I gave him a lantern for searching those dark corners. He is armed with a hand weapon and has a huge sack on his back to carry all that treasure. 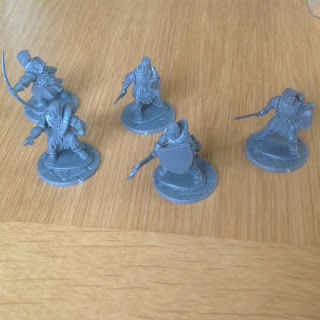 I need to get some paint on them and then we will be ready to play.