Yes indeed folks it is nice to play a character that you feel that you know and get into. I received Chef Ramsay as a present recently and was delighted to be able to give him an outing. 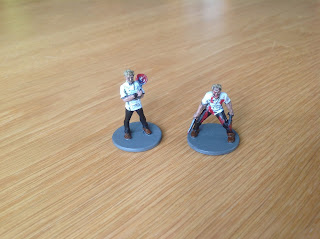 (Excuse the basic paint job. Slapped together in a hour just before play.)

He comes with the 'Born Leader' rule. This allows him to give a free action to another character. It must be taken in their next turn or they lose it. He can take it himself, if desired. It doesn't sound much but in reality is really does help the group.

Who is the biggest bad ass in the group that can dish out lots of damage. Lets them have another action and the potential for carnage increases.

Who is in trouble and really needs a hand? Give them an extra action to improve their mobility or damage dealing opportunity. 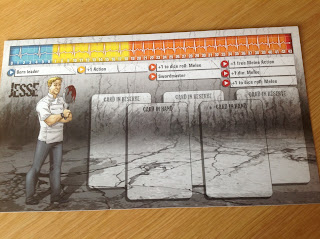 When you reach the Orange Phase he turns into a Melee expert by adding +1 to his Melee dice roll or becoming a Swordmaster, Treat all melee weapons as if they had the Dual symbol. Imagine welding a couple of Chainsaws. Now that would be some fun!

At Red level there are a further three Melee options to choose from, a free Melee action, +1 die in Melee or +1 to his Melee dice roll.

So Chef Ramsay is a man for getting the sharp knives out and getting stuck in. Perfectly logical really, for a Chef. A bit like 'the butcher' in Gangs of New York.

As a Zombivor he continues along this theme. 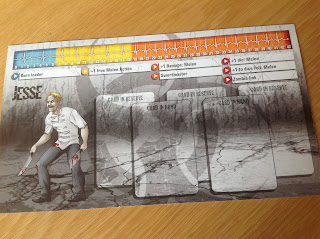 At Red level he has access to the Zombilink rule. This means that he will have an extra turn every time an extra activation card is drawn in the zombie pile. He also gets to take this turn before the zombies.

He is a real team player and awesome in Melee. Well worth considering for your Survivor crew.
Posted by Bullcher Feb at 07:16 2 comments:

What a day, what a blast, what fun. We laughed and knocked more fun out of a day gaming than I can remember for some time. Zombicide seems to be the game that keeps on giving. Today we played Zombicide Toxic City Mall. This was our first saunter into the expansion and we were hoping that rule changes would not detract from the game experience. We need not have worried and thats for sure!

Zombicide is a co-operative game. The first I have tried. This means that the players work together against the board. In this case we had six Survivors and as there were three of us we played two each.

In the first game - Death Row - I played Chef Ramsay (Jesse) and The Cop (Phil). Chef Ramsay was a recent birthday present and is the only Zombivor set of two that I have. Yes - now your Survivor can turn into a zombie - yikes! I had forgotten that I had Chef Ramsay so when I found him on the morning of our gaming it sparked a mad panic to get some paint on him. A good start to the day. 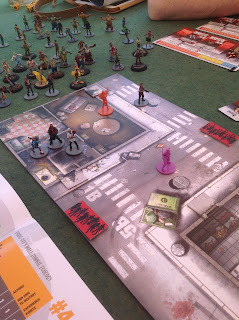 Joining in the fun were Wanda, Amy, Elsa and Ned. The first game was a four tile game with lots of zombie spawn points. The idea was to pick up the objectives in the rooms and take down the Toxic Abomination. Sounded easy enough, so off we went.

28mm Victorian Warfare had brought along a really cool selection of his own zombies. I just love them and they added really good fun element to the day. 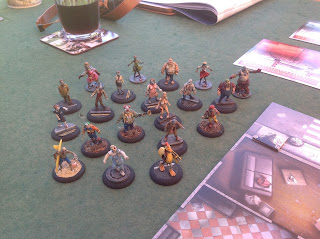 Soon we were joined on the gaming table by Granny and Ronald Mc Donald. 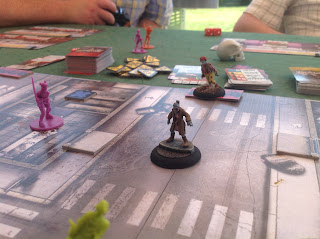 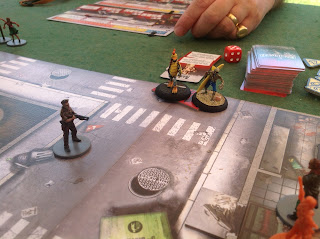 Every time the chicken guy died I imagined handfuls of feathers flying everywhere, especially when we took the chainsaw to him. Much merriment.

As is usual, things played to character and it wasn't long before chef Ramsay was up to his armpits in frying pans and food. Bloody useless for zombie killing but he could have easily rustled us up a little light lunch.

Soon we were being swamped. 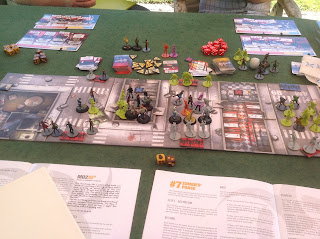 We had been too tentative at the start and with all the larking around we were suddenly in a spot of bother. The decision was taken to put Chef Ramsay in hot water by sending him ahead to open some doors. 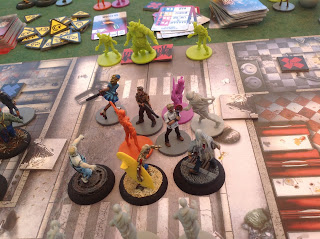 Then he was down. 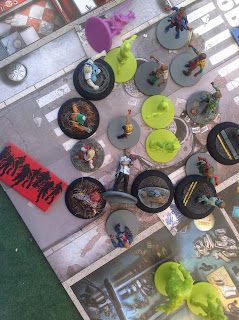 But in Zombicide Toxic city Mall you can rise again as a crazed Zombivor! 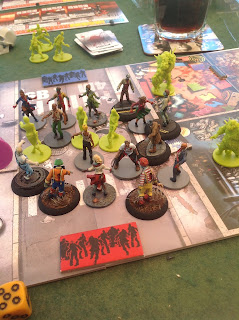 It was all great craic. Things got a little out of control and Phil was the the last man standing - I think a better description would sitting and cowering in the toilet, the room he happened to find himself holed up in. More laughter. 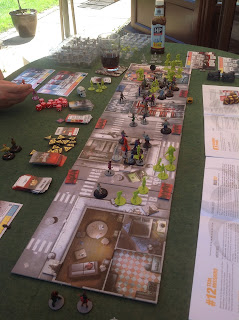 In the end Wanda saved the day by using her Slippery ability to glide by some of the zombie crowds before lighting up the Toxic Abomination with a Molotov Cocktail. A win! But only just.

Game 2 was a crazy affair that involved three cars and an insane amount of bloodshed. 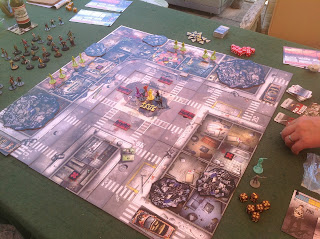 The board was much larger, with nine tiles. This gave us a bit more room and we approached with confidence. We split up (a first for me, felt edgy) and opened three doors at the very beginning. This activated 3 buildings worth of zombies as well as the four spawn points in the middle of the board. 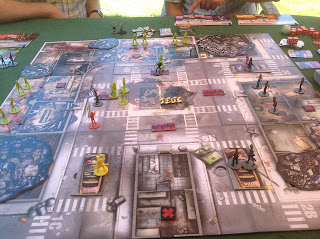 We had three Pimpmobiles and just drove them around the square running over zombies. Bedlam and mayhem. Elsa had the big gun for taking down the Fatties and Abominations but her aim was just awful! Much laughter as fail, followed fail, followed fail.

It wasn't long before good old Phil was racking up the kills. 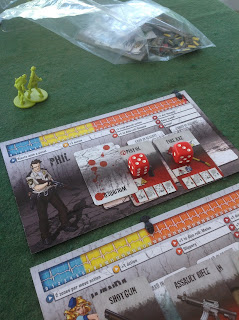 He had to leave the vehicle and go hide in a corner so that we could activate the final rooms before taking us over the final 'red' tipping point. However with the volume of zombies arriving we soon had several Survivors in the same position. Then we were in the red. New territory and really putting us under pressure as the number of zombies coming each turn ticked along.

By this time we had some new super weapons to use. The red level ones. Handfuls of dice to through. Fun, fun, fun!! And then Wanda found the final tank of fuel that we needed and was able to scoot off the board to victory. 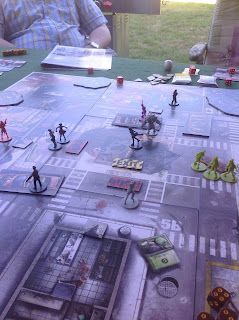 It was a truly amazing, breath taking days gaming filled with excitement and dramatic moments to remember. Astoundingly good fun with a couple of great friends.

I salute the makers of Zombicide. We killed hundreds of zombies along our journey of fun. We shot them up, hacked them to bits and ran them over in cars. Whats not to enjoy?

Thanks guys for a truly fab day. May there be many more like it in the future. Phew.
Posted by Bullcher Feb at 03:54 5 comments:

Zombicide - the next step

Yes indeed folks we are back to playing a little Zombicide. Got a game in last month and really got into the whole car thing. It was the first games day in the new house and with all the markers needed for Zombicide you need lots of space. I put both extra leaves in the table and we were good to go. 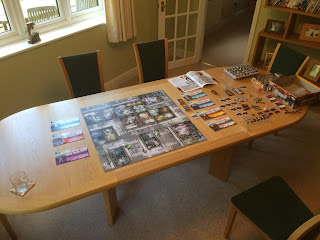 It was mayhem and really exciting. We managed to win out in the end with the Survivors in two cars scooting away from the gathering hordes. But it was nail bitingly close. 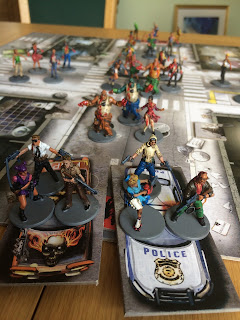 It makes such a difference to be playing with painted models. I invested some time last Christmas getting some basic colour on a fair few of them and it paid off. I still have tonnes to do but it does help get you in character when the model has some colour.

The plan for the weekend is to step up a gear and try the first upgrade to Toxic City Mall. 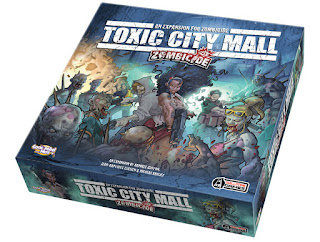 I have had a read through the rules and 'me oh my' it feels like we are going to have sooooooo much fun.

So far the Survivor's have been very fragile whereas now they can turn into Zombivor's with many more wounds and all kinds of fun stuff. I just can't wait to get stuck in :-). New weapons too - Yum!