Now this has become an interesting journey. I wasn't sure what to expect by way of the model for this guy. The drawing provided looks a lot like a gorilla. 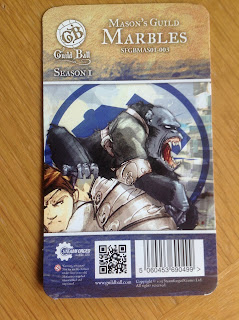 Broad shoulders and short nose, quite stocky with a short neck. But when the model arrived it just didn't feel that way to me. The model has a long nose and narrow face with narrow shoulders. I thought about it for a while and was struck by its similarity to the baboon. 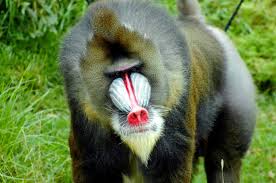 The more I thought about it the more it seems to be the right direction for me to take. 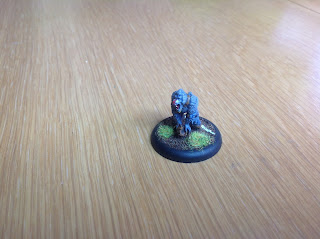 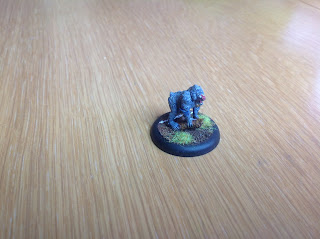 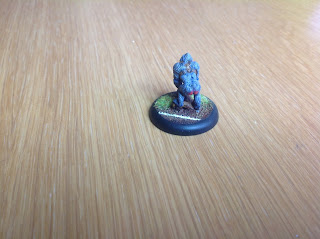 I had great fun picking out the colours and now he is quite an imposing chap. There is one flaw in that he should have a long tail. But maybe he lost that in a game of Guild Ball ..... its those Butchers you know, always on hand with a sharp knife ;-)

Marbles - I welcome you to team Masons!
Posted by Bullcher Feb at 02:52 13 comments:

I have been having some fun applying a little paint to my 'big guy', Brick. I love the model and he is coming along nicely. 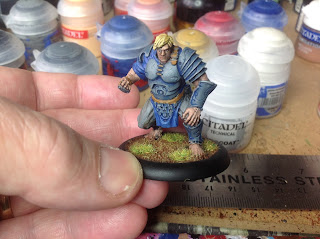 He kinda reminds me of those old westerns where someone was nearly always called 'The Swed'. He would be built like the proverbial 'Brick S**t House'. Hence the blond look.

The model itself has great detail and it is a joy to handle. There are lots of little swirls on the armour and then there are the multitude of belts and buckles. Just a great piece of work. Hats off to the sculptor.

And Yes, he has got eyes. We learned from playing Blood Bowl that models just don't perform as well without eyes ;-)

Well the postman has been and as a result I finally have a Guild Ball team. All members of the Masons are now present and correct. 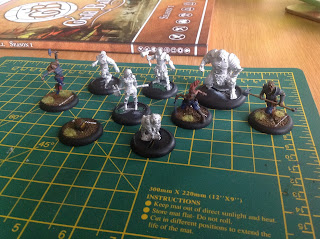 I have stepped away from the Games Workshop glue and am trying something different. So these are the first models that I have not pinned in quite some time and it will be interesting to see if they will be playable.

The new models are Brick (the big boy at the back), Marbles (the furry guy at the front), Chisel who is a season 2 addition (behind Marbles and looking particularly lovely), Flint (back left) and finally Tower (holding a very nice looking hammer).

So there will be some painting to do, rules to be read and tactics to be learned. All highly exciting!
Posted by Bullcher Feb at 05:19 8 comments:

The paints have made a reappearance and I have been busy with the Masons starter box set. They are lovely to paint and there is a good level of detail. I am enjoying picking out little bits and pieces. The colour scheme is coming together and I think they will be a pleasure to field. I have added a chalk line on the bases just to make it feel like a pitch. 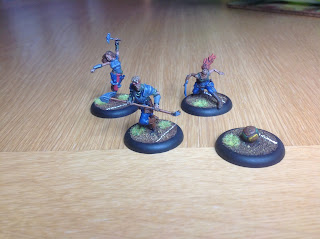 Mallet has that intense look to him. A man serious about success. 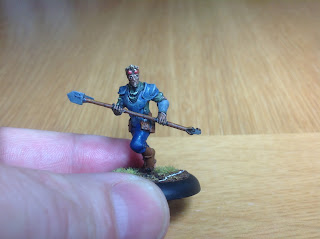 That weapon sure looks like he is going top cause problems for the opposition.
Posted by Bullcher Feb at 01:43 15 comments:

And then it happened - Guild Ball

My main playing partner has had a pretty hectic few months and hobby time has been at a premium. He is relishing a return and can light light at the end of the proverbial tunnel. A paint tray sits at the end. I suggested that he choose a 'project' he help get him restarted. Something exciting, interesting, challenging.....you know the kind of thing.

The Dark Templar launched himself into the new project yesterday. Guild Ball!!

Now you know that this propels me into action. Last year we were in the middle of our Batman games when Salute 2014 came along. We had so enjoyed Blood Bowl that Guild Ball caught my eye. The guys from Guild Ball had an amazing display at the event. Really persuasive.

The game looks fantastic! There are a small number of models all of whom have been lovingly sculpted. The game dynamics looks very interesting and the rules gave each team very different playing styles. What is not to love. I piled in a bought a couple of starter teams. One for me and one for the DT.

My choice was the Masons. 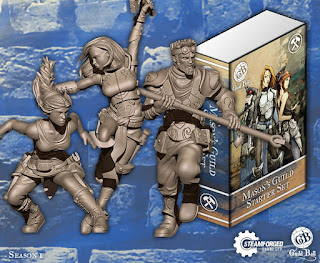 It was the female models that drew me in. So dynamic.

Lets start with Mallet though. He is a cool model with great detail and a wonderful large two handed hammer. As with all things there were some assembly issues but a combination of pins, greenstuff and glue got me there. Next comes Honour. Fabulous flowing movement in the pose. 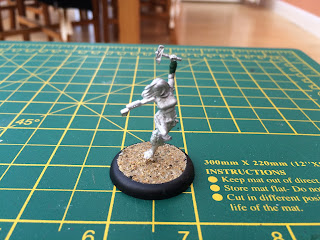 And then finally we have Harmony. I just love this model. I think it is the hair. You can imagine her dropping to this low pose before sweeping in to undertake her action. 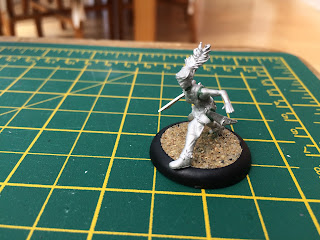 As luck would have it we didn't actually get to play any Guild Ball. Batman was still the main game at the time, then there was Zombicide. So many games so little time.

Sounds like Guild Ball could be the project that takes us to Christmas and beyond. Guess I will need to get the paints back out of the garage and make some purchases to fill out my team. The Dark Templar has even gone and switched teams. He started as the Morticians. Sounds like he has been doing some research. He has gone and bought The Butchers. Well he never was much of a salad guy!
Posted by Bullcher Feb at 01:45 4 comments:

I have settled down after the painting madness of Zomtober. Paints have been put away and the dining room is back as it should be. I am hoping to get a few games in next week - but we will see how that works out.

Last night I spent some time looking at the wonderfulness that is Black Plague, the next round of Zombicide. Anticipation is peaked.

I found a few good images and thought they would be worth sharing. 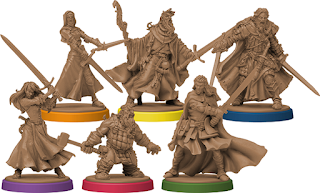 These are the new Survivors. I think that the models are fantastic. 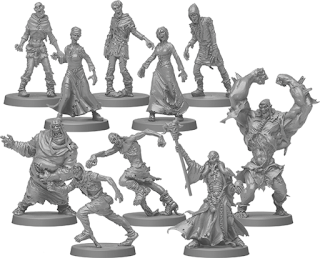 These will be the zombies. And then there are the big boys..... 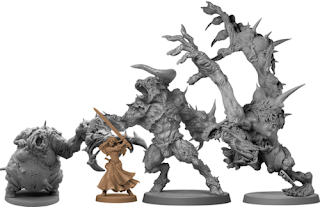 They have some impressive scale and should be marvellous fun to paint.

I am one of the $150 backers and below is a list of what you get for the money.

All kinds of loveliness. I guess the big question is when we can expect delivery? I so hope that it is before Christmas. He, he.
Posted by Bullcher Feb at 06:26 2 comments: